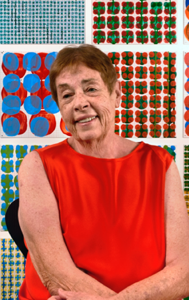 Jennifer Bartlett was born Jennifer Losch on March 14, 1941 in Long Beach, California.(1) Her father was a pipeline contractor and her mother was a commercial artist and fashion designer. At the age of five, Bartlett told her parents that she was going to be an artist and, aside from a brief period of indecision in college, she single-mindedly pursued that goal. As a child, Bartlett's main interests were reading and drawing and she took many art classes at school. After graduating from high school in 1960, she began studying art at Mills College in Oakland, California.
Bartlett had her first solo exhibition at Mills College in 1963 and received her B.A. the same year. Her works from this early period were loosely abstract and influenced by the work of Arshile Gorky. She then entered the Yale School of Art and Architecture receiving a BFA in 1964 and an MFA in 1965. While at Yale, Bartlett studied with Jack Tworkov, James Rosenquist, Al Held, and Jim Dine. In addition, she and other students were taken on regular trips to Manhattan to visit galleries and museums where they were exposed to the latest in contemporary art. Bartlett's fellow students at Yale included Richard Serra, Chuck Close, Jonathan Borofsky, Nancy Graves, and Rackstraw Downes. Her painting at this time was mainly Abstract Expressionist and she worked with large canvases.

In 1964, Bartlett married Edward Bartlett whom she had met at Mills College. After graduating from Yale the following year, she began teaching art at a branch of the University of Connecticut in Storrs. In 1968, she started working in a studio in New York City, continuing to commute to Storrs to teach. It was during this period that Bartlett began to paint on steel plates. Previously, she had tried a variety of different surfaces including wood, plastic, and aluminum. Eventually, influenced by New York's subway signs, she settled on one-foot-square steel plates coated with a layer of white baked enamel. Using enamel paints, she created minimalist works composed of groupings of steel squares painted with grids overlain with dot patterns.

Bartlett had her first New York exhibition at fellow artist Alan Saret's loft in 1970, followed in January, 1972 by a show at the Reese Palley Gallery. Also in 1972 Bartlett began teaching at the School of Visual Arts in Manhattan (where she worked until 1977), and she served as a visiting artist at the Art Institute of Chicago. She and her husband divorced that same year.

It was in 1974 that Bartlett's career began to accelerate. That year she had her first show at Paula Cooper Gallery in New York. She and Cooper became good friends and the Cooper Gallery continues to serve as Bartlett's main exhibition venue today. Bartlett also had her first European show at a gallery in Genoa in 1974, followed by an exhibition of works at the Garage in London. The work that brought Bartlett's art to widespread public attention was a large undertaking titled Rhapsody which she finished in 1976. The work consisted of 988 gridded and enameled plates which explored seven major motifs from different angles: mountains, houses, trees, the ocean, shapes, lines, and colors.

In 1979, Bartlett received her first public commission for a series of nine paintings for the lobby of a federal court building in Atlanta. The work titled Swimmers Atlanta was completed in November, 1979. In January of 1980, she traveled to Nice in the south of France planning to work on her unpublished book, The History of the Universe, a compilation of her recollections, dreams and fantasies. Instead, she became obsessed with the garden of the villa where she was staying and produced an extensive series of drawings exploring this motif from every angle. These drawings were the basis for her mural In the Garden which she painted late that same year for the Institute for Scientific Information in Philadelphia. Bartlett also created a series of paintings called At Sea, Japan which was later purchased for installation at Keio University in Tokyo.

Bartlett's first private commission came in 1981 when she was asked to decorate a room in the London home of Charles and Doris Saatchi. The result was a multiple media installation that recreated scenes from the garden on the interior walls of the dining room. Also late that year, Bartlett exhibited an installation called To the Island in which, for the first time, she placed three-dimensional reproductions of objects in her paintings on the gallery floor in front of the corresponding work. In October 1983, Bartlett married the French actor Mathieu Carriere and began commuting back and forth between New York City and Paris. She began to work again with large canvases, incorporating into that single surface the multiple viewpoints that previously occupied individual panels.

Two more commissions came Bartlett's way in 1984. First she was asked to create murals of the Atlantic and Pacific Oceans for the AT&T staff dining room at its New York headquarters. Her second project was to produce a mixed media installation for the Volvo Corporation headquarters in GÃ¶teborg, Sweden; this project was her first full-scale exploration of sculpture.

In 1985, Bartlett's book, A History of the Universe, was finally published.(2) The following year, the Walker Art Center in Minneapolis held a retrospective of Bartlett's work including 40 large scale paintings and 50 drawings.(3) Recent projects have included helping design a renovation project for New York City's Battery Park and a commission to do a series of drawings for the ceiling of a Buddhist Temple in Homan-ji, Japan. Currently, Bartlett continues to live and work in New York, showing regularly at Paula Cooper Gallery and other venues.

Bartlett works in a variety of media including paintings in oil, enamel, and watercolor; prints in a variety of techniques; drawings; and sculpture in wood, metal, and paper. Projects since the late 1980s often incorporate multiple media in a single work. In all these media, an underlying grid structure is often present. Bartlett also has designed sets and costumes for two theater productions, one in Munich and the other in Paris. Her preferred subjects are objects and landscapes. Figures are rare in her work until the 1970s when they appear in the form of an ellipse. In her more recent works, figures have also appeared in the form of statues, shadows, and children's drawings.

Bartlett uses drawings and watercolors as preparatory studies for her paintings and prints though they also often are used as integral parts of her installations. Her prints are usually created as a response to her works in other media. Bartlett has studied printmaking in both the United States and Japan but rarely cuts or engraves her own plates, preferring to work with a skilled artisan.

Bartlett likes to experiment and has worked in an array of styles ranging from the purely abstract to highly realistic. She seems more interested in the process of learning other artist's styles rather than in perfecting her mastery of a particular style. As a result, for much of her career her "signature style" has been eclectic and changeable.(4) Bartlett's art is characterized by highly systematic, and almost obsessive, explorations of chosen motifs from multiple angles which are incorporated into a single work; she often extends these investigations further by working in series. Underlying and motivating this working method is an absorbing interest in large-scale cyclical change such as the seasons, weather, light, and most particularly, the passage of time.(5)

Your current search criteria is: Artist/Maker is "Jennifer Bartlett".